Great news! Samsung has finally started rolling out One UI 2.0 Beta for Note 10/Note 10+ users. The first beta firmware for the said devices comes with the ZSJF build number and November 2019 security patch. In this tutorial, we will show you how to manually install Android 10-based One UI 2.0 Beta on Samsung Galaxy Note 10 and Note 10+ by installing the OTA package via stock recovery.

A couple of weeks ago, Samsung announced One UI 2.0 Beta, based on Android 10. The beta is already officially available for the Galaxy S10 devices in various countries/regions including France, Germany, Poland, India, the US and more. We already covered a detailed tutorial to manually install One UI 2.0 Beta on Galaxy S10. Last week, the manufacturer also released Beta 2 for the S10 series, but also mistakenly rolled out the first Beta for Note 10 and Note 10+. However, it was halted soon after, possibly due to some issues.

A recent report from SamMobile.com has confirmed that Galaxy Note 10/Note 10+ One UI 2.0 (Android 10) Beta is now finally available, starting for the users in Germany. If you own the said device(s), then you enroll it in the One UI 2.0 Beta Program via the Samsung Members app. If you don’t know how to do it, then follow the steps below.

Steps to Enroll in One UI 2.0 Beta Program

If you have haven’t been able to enroll your device in the official beta program, or it isn’t available in your region yet, then you can manually upgrade too. This could be done by installing the One UI 2.0 Beta OTA package/zip using stock recovery, given that your Note 10/10+ is on the required firmware with the ASJ2 build number.

Samsung’s One UI 2.0 Beta is based on Android 10, which was released in September by Google and brought a plethora of new features. These include the new and improved gesture navigation, highly efficient permissions management, Focus Mode in Digital Wellbeing, Smart Reply in notifications, System-wide Dark Theme (Which Samsung already introduced in One UI 1.0), and much more.

With One UI 2.0, Samsung is aiming to improve the overall user experience by refining the current features and adding some new ones. Below are some of the major new changes and features offered by Samsung One UI 2.0 Beta on Galaxy Note 10 and Note 10+.

1. Focus on the task at hand

Samsung has worked a lot to improve the overall user interface for a better experience. With One UI 2.0, the majority of on-screen pop-ups like Volume Controls and Caller Notifications are now minimized by default, to prevent distractions when you’re performing a task (Let’s say you’re playing your favorite game or a video in full-screen).

Furthermore, the loading indicators are now embedded and buttons arrangement is much more simplified. All these improvements and changes in Samsung’s One UI 2.0 help you focus on the task at hand, without missing any important information. Although small, but these changes drastically affect the overall user experience.

Android 10 introduced a new system-wide dark theme feature. But it isn’t something new for Note 10/10+ users since One UI 1 based on Android Pie already offers this feature, named as “Night mode”.

With One UI 2.0 based on Android 10, Samsung has made some more improvements to the said feature. First of all, “Night mode” is now called “Dark mode”. Second, Dark Mode now further expands to both the home screen and lock screen as well, adjusting the brightness of elements like images, icons, texts, and colors. This allows the display to cause less strain on the users’ eyes while reducing battery consumption at the same time.

Focus Mode is a new feature introduced by Google in Android 10 and is present in Samsung One UI 2.0 Beta as well. When enabled, it lets you temporarily pause the selected apps for a set period of time, allowing you to focus more on your life and be efficient.

The new Device Care menu the device Settings has been improved with easier access to essential functions, that can help you optimize your Note 10’s performance on-the-go.

One UI 2.0 also brings Android 10’s improved gesture navigation to supported devices, including the Note and Note 10+. The navbar has been minimized a lot more and takes the least amount of space on the screen. This gives you a tad bit of more screen space.

Going back to the last menu/screen could easily be done by swiping inwards from either edge of the screen. Opening the app drawer or going straight back to the home screen just requires a swipe up from the bottom of the screen. Overall, all the flaws experienced with gesture navigation on Android Pie are now nearly gone. Take a look at the video below, demonstrating the new gesture navigation in One UI 2.0.

The above were only a few of the major changes that One UI 2.0 will bring to your Galaxy Note 10/Note 10+. There’s a lot more inside this new update from Samsung. It instantly feels more fluid and clean when compared to the old sluggish Samsung Experience skin. The final stable release is still afar and we will probably see more new features and changes till then.

Now, if you’re interested in testing the new and updated OS, then head below to download One UI 2.0 OTA package for Samsung Galaxy Note 10/Note 10+ and manually install it right now by following the instructions. 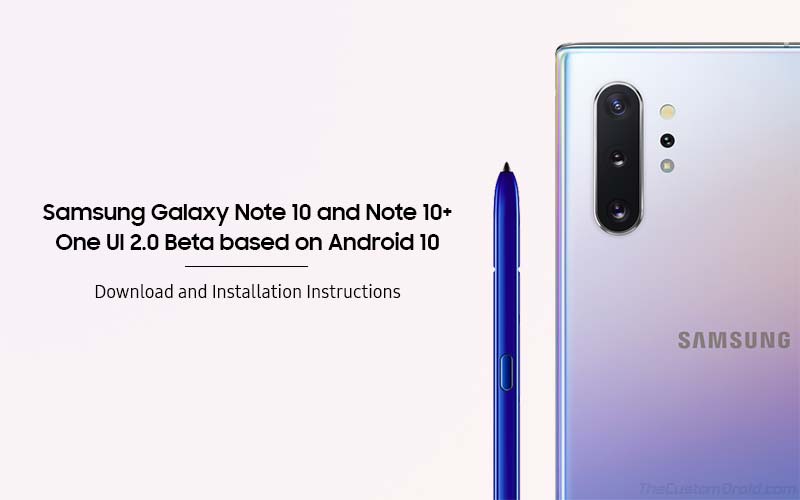 Before you proceed to the instructions below, take note of a few important things first, as follows:

Android 10-based One UI 2.0 Beta is compatible with the following devices, along with their corresponding model numbers:

Ensure that you fulfill all the requirements stated below before you head below to the instructions to install Samsung Galaxy Note 10/Note 10+ One UI 2.0 Beta OTA, based on Android 10.

Update (6 December 2019): One UI 2.0 Beta 4 for Galaxy Note 10/10+ is being rolled out. This latest beta update fixes a bug that prevents the phone from vibrating when the S Pen is removed, disappearing app icons, device reboots while playing music, and more. Via: SamMobile

Note: The One UI 2.0 Beta OTA package/zip is provided in the “.bin” extension/format, directly captured from the Samsung servers. Once you have downloaded the package, rename it to “update.zip”, thus changing the extension to “.zip”.

Ensure that you download the OTA package corresponding to your phone’s name and model number.

These OTA packages were captured by XDA member Cyber John and shared by another forum member henklbr. We thank both of them for devoting their time and providing the update files for those who might need them.

Once you have made sure that your Note 10 device is on the required Pie firmware, you can follow the steps below to manually install One UI 2.0 Beta on your Samsung Galaxy Note 10/Note 10+ using ADB Sideload or SD card in stock recovery. Also, note that the OTA files are incremental, they will work in the following order: ASJ2/ASJG/ASJM/ASJ8 > Beta 1 > Beta 2 and so on.

As soon as the command is executed, the OTA package will begin installing. The installation process could take as much as 10-15 minutes, so be patient and do not disconnect the device from the PC. Once the installation finishes, your Galaxy Note 10/10+ will reboot automatically into the upgraded Android 10 OS with One UI 2.0 Beta.

After installing the beta on your phone, it is strongly recommended to perform a factory reset via the stock recovery. This shall help prevent any unusual bugs/issues. To do so, follow the steps below:

Note that this is beta software and might possibly contain bugs that could prevent the normal operation of the device. Although, so far, nothing major has been reported.

So, you have just successfully installed One UI 2.0 Beta on your Samsung Galaxy Note 10/Note 10+. If you have any questions regarding the process, let us know through the comments. Please make sure to mention your phone’s model number and firmware build number installed on it.