XDA Developer topjohnwu has released stable Magisk 17.2 with excessive obfuscation, a new communication scheme, updated Resetprop and more. You can now download Magisk 17.2 and Magisk Manager 6.0.0. The complete list of changes and installations instructions are provided below.

If you’ve ever associated yourself with the rooting scene, you shall definitely have heard of ‘Magisk‘. It started as a utility for adding features to rooted phones, somewhat similar to the infamous Xposed Framework. However, Magisk had an upper hand as it allowed modifications systemlessly. It was later that Magisk developed as a self-efficient root solution. From that moment on, it has become the go-to utility for rooting Android phones, which offers several other features like hiding root from certain apps, checking SafetyNet status, installing modules to add features and more. Today, the developer announced the major Magisk 17.2 update that comes with several changes and fixes.

On 31st August, developer topjohnwu tweeted and hinted at an upcoming major update for Magisk. And so it came to be true on 1st September, that is yesterday when he pushed the new Magisk 17.0 update for its users. It wasn’t much later that the release was halted due to a bootloop issue caused due to incompatible Magisk database. The issue was faced by users who upgraded directly from v16.0 to v17.0, which caused the daemon to crash. The developer, however, was quick enough to roll out a hotfix release.

Update (21 September 2018): You can now download Magisk 17.2 and Magisk Manager 6.0.0 with excessive obfuscation, a new communication scheme, updated Resetprop and more. Check out the complete changelog below before you install it.

The first major change is in regards to the support for A/B partition devices. According to the developer, some changes in the Pixel OTA engine prevented Magisk from being installed on the inactive slot. This new Magisk 17.1 update fixes the issue completely, thus providing better support for A/B partition phones. The new version also adds proper support for Android Pie. So, those of you running Pie on your device officially or unofficially can now root it using Magisk. 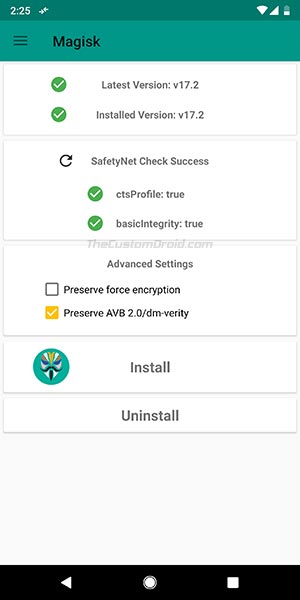 Also, on the previous release, the SafetyNet check resulted in an ‘Invalid response’ error. Which was because Google depreciated the old API. The new API is now being used by Magisk, which shall fix this problem. Topjohnwu also talked about the new release cycle. According to which, each major version bump (v16.0 -> 17.0) will be provided on the ‘Stable Channel’ and any minor version bumps  (v17.0 -> v17.1) will be on the ‘Beta Channel’. To add further, Magisk 17.1 now supports Samsung Galaxy S9, S9+, and Note 9 completely.

The complete changelog for Magisk 17.2 and Magisk Manager 6.0.0 is listed below. We have quoted all these from the original XDA thread.

The developer has made many major improvements and changes in this new update for a better experience for rooted users. We duly appreciate his hard work and the time he has devoted to the community. You can now move down towards the next section to download Magisk 17.2 and Magisk Manager 6.0.0 APK right now.

The new stable version has been provided as a flashable ZIP, that could be installed via TWRP or other custom recoveries such as RedWolf Recovery Project. The Magisk Manager APK is also provided should you wish to update it manually.

Installing Magisk on Android is easy, even if you’re going to do it for the first time. To do so, there are two different methods – (1) Flashing Magisk 17.2 ZIP via TWRP recovery or (2) By patching the stock boot image and flashing it via fastboot. The second method could look a bit confusing at first but works flawlessly if you have the correct boot image corresponding to the firmware installed on your phone. You can either extract the stock firmware file to get the stock boot image or use try downloading it from firmware.mobi.

Before everything, we strongly recommend you to take a full backup of all your data on the device. This shall prevent any data loss situation should any issue arise after the installation. Further, for method 2, you must also install the required Android platform-tools on the PC.

In case you already have the previous version installed, then you can simply update Magisk 17.2 via the simple set of instructions below.

According to the developer, upgrading from v16.0 to v17.0 caused Magisk daemon to crash. So, if you have upgraded directly from v16.0 to v17.0 then your phone might get stuck in a bootloop. If that happens, simply download and flash the uninstaller ZIP to remove Magisk and then flash Magisk 17.2 ZIP file via TWRP recovery.

When the phone boots, it shall be running the latest Magisk 17.2 with Magisk Manager 6.0.0 installed. You can go ahead and check the SafetyNet status and it should no more return the ‘Invalid response’ error. Users with A/B partition devices such as the Google Pixel, Mi A2, etc should now have a better chance of receiving OTA updates while preserving Magisk.

Now that your phone is rooted, you can also install root-enabled apps, use mods like ViPER4Android/Dolby Atmos, hide root from apps like Pokemon Go, and install Magisk Modules to enable extra features on your phone. We highly value the efforts of topjohnwu for making it possible for enthusiasts like customization to a whole new level.

So, you have just been able to download Magisk 17.2 and install/update it. If you have any questions, please leave them down in the comments.