XDA developer topjohnwu has recently updated Magisk Stable to the latest version. Users can now download Magisk 20.1 Stable and Magisk Manager 5.7.0 for their Android devices. This latest update of Magisk majorly focuses on fixing bugs and also introduces a major new feature that allows users to hide the Magisk Manager app from being detected.

Magisk is one of the most powerful and probably the only root solution in 2019 that works across various Android versions and on a majority of different OEM devices. If you’re new to Magisk and aren’t exactly sure of what it is or what it is for, then we suggest you go through the first few sections of this post or read the whole story on Reddit, published by its creator John Wu (Mostly recognized as “topjohnwu” from XDA).

The developer has recently announced a new update and through this post, you can download Magisk 20.1 Stable and Magisk Manager 7.4.0 APK.

The previous stable version of Magisk (version 20.0) was released a few weeks ago and brought full support for devices running Android 10 (Q), along with support for Google’s new system-as-root implementation. With this current and latest version, the developer has worked on finetuning the features by fixing a lot of bugs present in the previous release. But that’s not it, Magisk 20.1 also comes with a major new feature that helps users hide the Magisk Manager app from other third-party apps, that might stop working after detecting Magisk Manager or its related components. 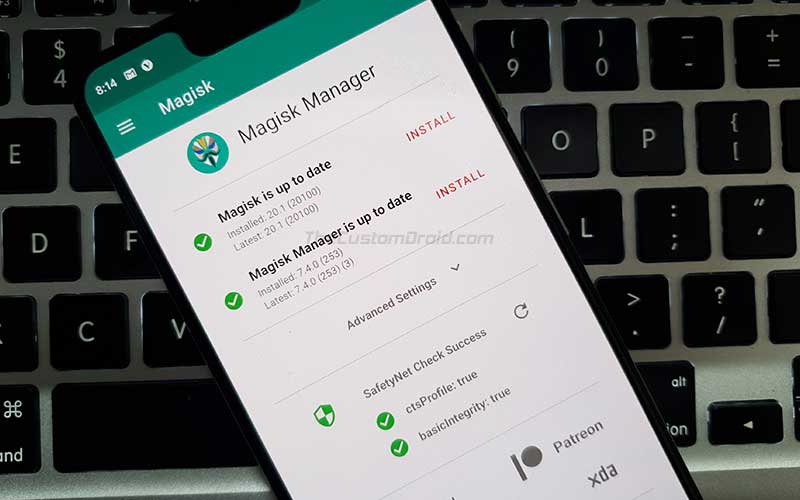 Before you download Magisk 20.1 Stable (Magisk Manager 7.4.0), let us take a complete look at the changelog, as mentioned by topjohnwu himself:

According to the official release notes, this latest stable version of Magisk adds a new and updated ability for Magisk Manager hiding. With Magisk 20.1 and Magisk Manager 7.4.0, a new hiding mode is available for devices running Android 9 Pie and Android 10.

So how does this new hiding feature works? Before everything else, the app will verify compatibility. If your device is supported, then Magisk Manager will download and customize a heavily obfuscated stub APK, which will serve as a replacement for the actual app. Once you launch the said stub app, it will download the full app into its own private internal data and will then dynamically load the full Magisk Manager app.

It is also worth noting that not all Android 9 Pie and above devices will be able to use this new feature. That’s because to use the stub app as actual Magisk Manager, the daemon will need to communicate with the app in a special way. Now, some device OEMs might block certain broadcasts on their devices, thus preventing the proper communication between the stub and the full app.

In case your device does not support this method, there are still a few things that you can do to hide Magisk Manager. First, you can customize the app name to whatever you want. And second, the new repacked Magisk Manager app will be signed with newly generated keys to prevent signature detection.

Like any other previous version, the latest Stable version is now available as a flashable ZIP file that could be installed using a custom recovery like TWRP recovery. We have also provided the link to download the APK of the latest version of Magisk Manager, in case you want to use it to patch the stock boot image for the alternate installation method.

How to Install Magisk 20.1 Stable?

There are two different methods to install Magisk on your Android device. The first method is by flashing Magisk using TWRP recovery, which is the most direct way. Or, you can use the second method that involves patching the stock boot image using the Magisk Manager app and then flashing the patched boot image to your device via fastboot.

The second method comes in handy if a custom recovery like TWRP is not available for your Android device, or you don’t want to use a custom recovery in the first place. It is also much easier to install OTA updates on devices that are rooted using this method. All you will need is the stock boot image of currently installed software version/build number, for your device. You can extract it either from the OEM Factory Image or full OTA update package, or try downloading it from firmware.mobi.

Before you install, we strongly recommend taking a full backup of all your data on the device. This shall prevent any data loss situation should any issue arises after the installation. Also, go through the instructions and familiarize yourself with the procedure before you start performing it.

In case you already have the previous version installed, then you can simply update to Magisk 20.1 Stable using the instructions in the next section.

How to Update to Magisk v20.1 Stable?

When your device boots, it shall be running the latest Magisk 20.1 Stable version with Magisk Manager 7.4.0 installed. You can go ahead and check the SafetyNet status, and it should pass. Now that your phone is rooted, you can also install root-enabled apps, use mods like ViPER4Android, or use the “Magisk Hide” feature to hide root from apps like Pokemon Go. You can also install Magisk Modules to enable extra features on your phone.

So you were able to download Magisk 20.1 Stable and install/update it on your phone. The developer has surely made some massive improvements and changes in this latest Magisk update. We duly appreciate his hard work and the time he has and is devoting to the Android community. If you have any questions about the latest version, leave a comment.