Android smartphones from Lenovo-owned Motorola aren’t the best bet when it comes to regular software updates. Most of these phones have been criticized for delayed software updates and broken promises. Talking about updates, last year Motorola publically disclosed the list of their phones that were designated to get Android Oreo update. Most of these phones including the Moto G5/G5 Plus, Moto G5S, Moto G5S Plus, Moto Z, Moto Z Play, Moto Z2 Play, and Moto X4 have already received the Android Oreo update. Motorola decided to directly jump to Android 8.1 Oreo, skipping 8.0 as the company was already behind the schedule.

However, both the Moto G4 and Moto G4 Plus were not present in the list. The phones were released back in 2016 and came with Android Marshmallow out-of-the-box. Seeing the outrage among the users, the company reconsidered its decision and has finally released stable Android 8.1 Oreo update for Moto G4/G4 Plus.

XDA Senior Member rajatgupta1998 was able to capture the Android 8.1 Oreo OTA package for the Moto G4/G4 Plus. The new software comes with OPJ28.111-22-1 build number and December 2018 security patches. Another forum member Jleeblanch made TWRP flashable zips of the stock firmware. So users who have an unlocked bootloader with TWRP can easily install Android 8.1 Oreo on Moto G4/G4 Plus. 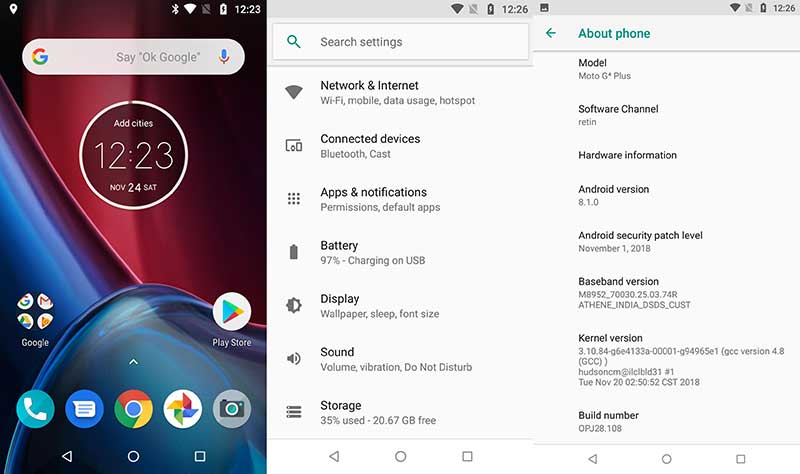 Since the OTA updates your phone’s bootloader and modem to the newer Oreo version, you will NOT BE ABLE TO DOWNGRADE back to Nougat if you choose to sideload the OTA and will be forced to wait for the stable Oreo update. For the same reason, it is best to use the Android 8.1 Oreo TWRP Flashabe zip to upgrade. Using it will not update your Moto G4’s bootloader and thus allow you to downgrade easily, should you ever want to do it.

The download links have been provided by XDA Senior Members rajatgupta1998 and Jleeblanch on their XDA threads (1 & 2). So the credits go to them! Don’t forget to give him a thumbs up.

How to Install Android 8.1 Oreo on Moto G4/G4 Plus

As told earlier, it is best to use Method 2 and install the TWRP flashable zip of the Android 8.1 Oreo build to upgrade. It will allow you to easily downgrade back to stock Nougat firmware or a custom ROM. On the other hand, Method 1 will block you from downgrading at all.

Note that the first boot may be slow and can take around 10 minutes. Once your Moto G4 gets into the OS, set it up by following the on-screen instructions. Then enjoy all the latest Oreo goodies on your Moto G4/G4 Plus.

So, this was our tutorial on how to manually install Moto G4/G4 Plus Android 8.1 Oreo update. If you have any queries regarding the procedure, please feel free to comment below.