In this tutorial, we will show you how to manually install Moto G5 Android 8.1 Oreo update. The instructions will help you flash the fastboot image or sideload the OTA package via stock recovery. The process is very easy and will help you upgrade your phone right now.

Within the last month, Lenovo-owned Motorola has been very active in delivering Android Oreo for the impending devices. Most of the phones that were listed by Motorola have already received the update. We also recently saw Android 8.1 Oreo rolling out to the Moto G5S and the G5S Plus. Towards the end of September 2018, the 2017-released Moto G5 also started receiving the major OS updrade in India. The OTA is yet to be available for other regions and even if you’re in India, it might take some time.

But if you’d like to install Moto G5 Android 8.1 Oreo update right now, then the instructions below will help you. Senior member freeZbies from the XDA community was able to capture the OTA package, as well as the fastboot image. Users with stock Nougat firmware (Build: NPPS25.137-93-2-5) installed, can easily sideload the OTA via stock recovery. On the other hand, users on a different build number or using a custom ROM can easily flash the fastboot image. The process itself is pretty easy and does not require any sort of expertise. 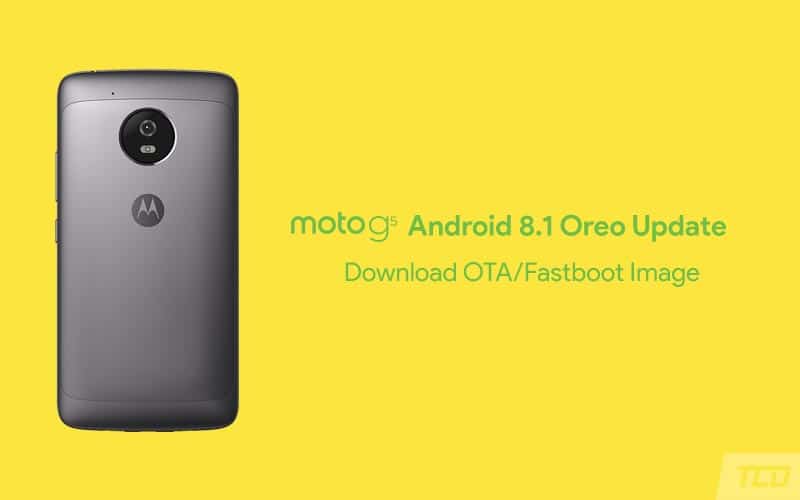 This time, Motorola decided to skip Android 8.0 Oreo and made the direct jump to Android 8.1 Oreo. In my opinion, the decision seems more logical at this point, keeping in mind that several other OEM devices are already getting Android Pie.

As mentioned earlier the Android 8.1 Oreo OTA has started rolling out to the users in India with a new build number – OPP28.85-16. Now before we head to the instructions to manually install Moto G5 Android 8.1 Oreo update, let us take a quick look at the changes and new features it brings.

This new firmware carries all the standard Oreo features as seen on version 8.0 and 8.1. For starters, there’s Picture-in-Picture Mode that lets you watch a YouTube video, make a video call over Google Duo, and more while operating other parts of the OS. App shortcuts is another significant feature that provides app-specific actions for getting things done much faster. And then there are Notification Dots, Smart Text Selection, Autofill Framework, and much more.

The new software comes with a significant amount of features, so you’ll get to experience a whole new and improved OS, compared to Android Nougat. Last but not the least, Android 8.1 Oreo update for Moto G5 also brings August 2018 security patches.

Even before you follow the steps below to install Moto G5 Android 8.1 Oreo update, make sure to check for the OTA notification first. So, in case the OTA has arrived on your phone, you won’t need to go through the manual upgrade process. To check for it, go to Settings -> About phone -> System updates.

Make sure that you fulfill all the requirements stated above before you head down below and follow the instructions to install Moto G5 Android 8.1 Oreo update.

Again, thanks to XDA Senior Member freeZbies for providing the link to the files.

So, as we told you earlier, both the OTA package and fastboot images are available, both of which follow a different installation method.

Method 1 below will help you sideload the Oreo OTA zip via stock recovery. In which case your phone must be running the required firmware (See Prerequisites #4) and does not need to be bootloader unlocked. Method 2, on the other hand, will allow you to flash the Oreo fastboot image. This would come in handy for those running a custom ROM/TWRP/root or a different firmware than the one required for the OTA.

Once your phone boots into the OS, follow the on-screen instructions to set it up. After that, you should be able to enjoy all the Oreo features on your Moto G5.

Well, Motorola may not be as reliable as some other Android OEMs when it comes to software updates, but it still kept its words. The Moto G5, specifically, came with Android Nougat and would allegedly be eligible for the Android Pie upgrade. Although, nothing is confirmed for now. The official list released by Motorola only mentioned the 6th generation Moto G devices. But only time will tell.

So, there you go! You have just been able to manually install Moto G5 Android 8.1 Oreo update. If you have questions regarding the process, please let us know by leaving a comment below.