If you’re new to Android software modding and things like rooting, TWRP, custom ROMs, etc, then you should understand what a boot image is and its importance when dealing with such things.

According to Google, an Android boot image (often referred to as a boot.img) contains the kernel and ramdisk that loads the Android system. It is also the first partition image loaded by the bootloader during a normal boot process.

The software on OnePlus devices is easy to customize due to the fact that the bootloader can be unlocked in a straightforward way. Meaning, you can play around with the software as much as you like. You can root the phone, install TWRP custom recovery, flash custom ROMs/kernels/mods, and do much more.

The OnePlus 8T is no different. Soon after the launch, the phone quickly picked up a decent amount of support from the custom development community.

Recently, we covered a tutorial a step-by-step tutorial on rooting the OnePlus 8T without using TWRP recovery at all. A copy of the stock boot image file for the installed OxygenOS version is required during the rooting process, as shown in that tutorial.

However, there could be a chance that Magisk might not have stored a backup of your stock boot image – (1) because you used a pre-patched boot image provided by another person, or (2) because of a general software error. In such a case, the stock boot image could come in really handy for uninstalling Magisk and unrooting the phone completely.

Flashing the stock boot image is also considered one of the first steps when debugging and fixing software boot loops. It could help you eliminate the possibility of having a modified boot partition causing a problem.

Below, you will find the links to download the stock boot images for the OnePlus 8T. These boot images have been extracted directly from the respective full ROM packages. We would give our best to keep the links up to date for the latest boot images.

If you want, you can also self-extract these images from the OxygenOS full ROM/OTA package using the Android OTA Payload Dumper.

How to Flash a Boot Image on OnePlus 8T?

Installing or flashing a boot image file on your OnePlus 8T could be easily done by executing a Fastboot command from your computer. The alternative way is to flash the boot image file through TWRP recovery (in case you have that installed).

The latter is more convenient because it wouldn’t require a computer. We have covered both the methods below for you. The same instructions will apply while flashing both, a stock boot or a patched boot image.

Next, open the command window inside the Platform-Tools folder. Then, download the boot image file that you wish to flash to your OnePlus 8T and move it inside the ‘platform-tools’ folder on your computer. 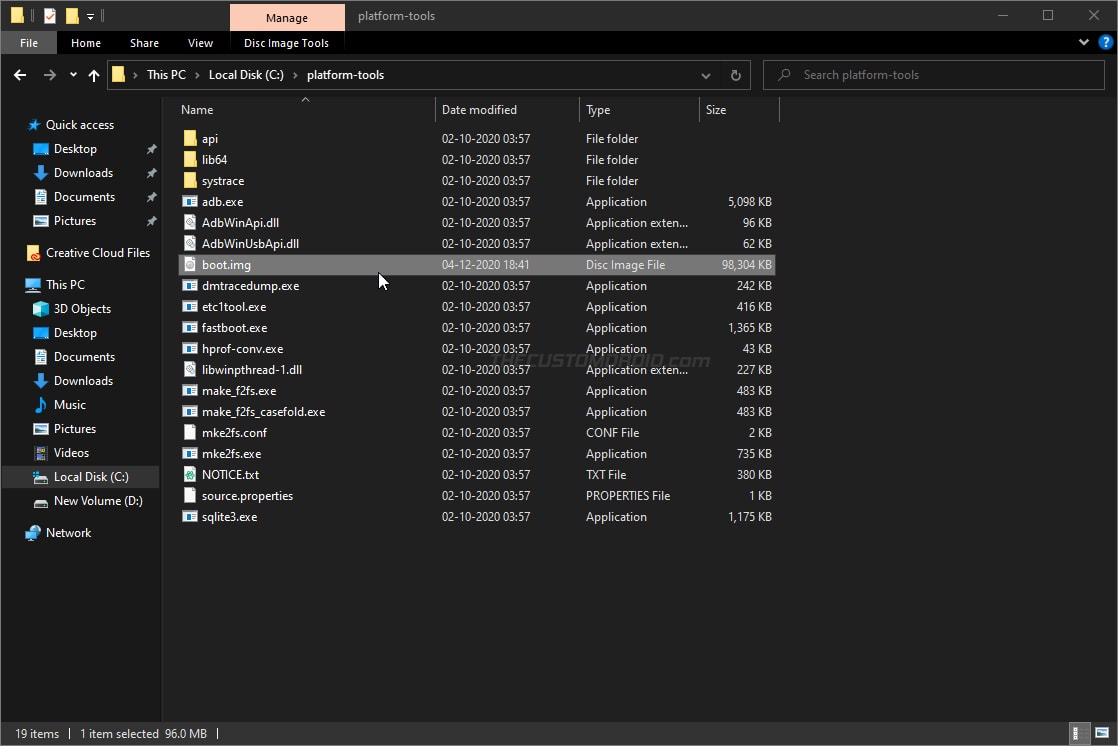 Now boot your OnePlus 8T into Fastboot Mode and connect it to the PC using the USB cable. Then, execute the following command to verify that your PC can communicate with your phone over the fastboot interface.

Now execute the following command to finally flash the boot image to your OnePlus 8T:

In the command above, you have to replace “boot-image-filename.img” with the full filename of the boot image you’re flashing. For example, if you have downloaded the stock boot image from above, the filename should be “boot.img” and the command should look like the following:

TWRP for the OnePlus 8T is not available yet. So, we decided to keep the following method in place for documentation purposes. Once a working build of TWRP recovery is available for the phone, you could use the instructions below.

As mentioned earlier, an alternative (and easier) way to flash the boot image to your OnePlus 8T is by using TWRP. Unlike the first method, this wouldn’t require you to have a computer. To flash using this method:

By now, you should have a very good idea of what a boot image is, why you would need it, and also how to flash one.

The instructions under Method #1 are what you’d generally use to flash the patched boot image when rooting your OnePlus 8T with Magisk, and also when flashing back the stock boot for unrooting.

Even if you are not into rooting and software modding, having some basic knowledge of boot images could come in handy when debugging and fixing software issues like a boot loop.

We hope the provided information proves useful to you. Also, we will constantly be updating the download links as new OxygenOS updates (stable and open beta) are available for the OnePlus 8T. But if we do forget, don’t hesitate to throw us a reminder.

If you have any questions regarding the topic or the instructions, feel free to drop a comment below.

How to install the infamous ViPER4Android audio mod on OnePlus 8T

Google Camera for OnePlus 8T – Download and installation, and setup

How to Factory Reset the OnePlus 8T