Android Pie-based One UI Beta for Galaxy Note 8 is now available. In this post, we will guide you on how to manually install One UI Beta on Samsung Galaxy Note 8 Snapdragon and Exynos variants. This could be easily done by sideloading the One UI OTA package via stock recovery.

Samsung has been long known for its bloated stock firmware, ever since TouchWiz to Samsung Experience. With Android Pie, Samsung has finally decided to rethink its stock skin by completely redesigning the user interface and focusing on features that actually would come in handy to the users.

The new OEM skin is about two major feats – (1) One-handed usage for taller displays and (2) a dark interface with a fancy Night Mode. Unlike SE, One UI brings features that are truly useful to the users and are not gimmicks that one would use and forget. The screenshots below will help you get a better idea of the visual changes. Thanks to Max Weinbach from XDA for the screenshots!

Samsung has already started rolling out stable Android Pie update (One UI) for the Galaxy S9/S9+ and Galaxy Note 9. Meanwhile, the Galaxy S8 and S8+ have had access to One UI Beta builds, so that users can try the new Samsung skin before it is out for the public. Following the same, beta builds of One UI for Galaxy Note 8 is now available as well. It is available for the Snapdragon (N950U) and Exynos (N950F) variants.

How to Opt for One UI Beta?

According to a recent report from SamMobile, official One UI beta for the Samsung Galaxy Note 8 is now available in UK and South Korea. It should soon be available for the rest of the regions too. If you’re keen on testing Android Pie-based One UI Beta on your Note 8, you can opt for the official beta program by following the instructions below.

If you have opted for the beta program and have still not received the update, OR you want to get your hands dirty, then you can simply follow the instructions below to sideload the OTA and manually install One UI Beta on Samsung Galaxy Note 8. 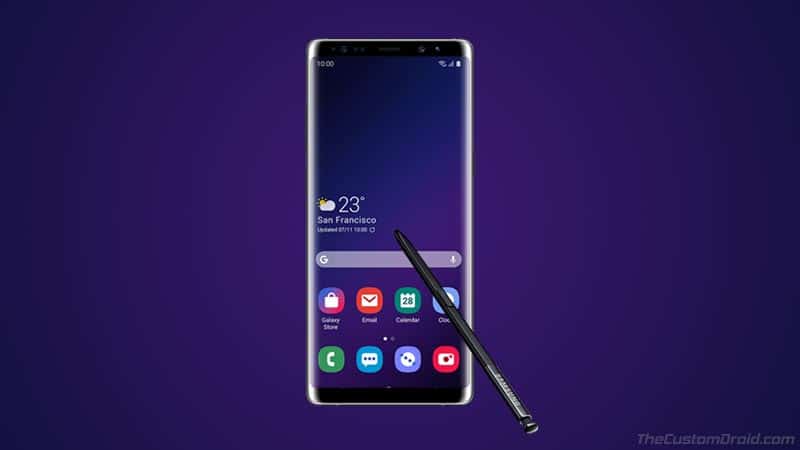 For now, official Android Pie-based One UI Beta is only available for Exynos Galaxy Note 8. The OTA package was captured by Abhijeet from SamMobile and shared/uploaded by XDA Senior Member henklbr on this XDA thread. The sole credit goes to them!

For the Snapdragon (SM-N950U), only closed Beta builds of One UI are available. It is highly likely that the official beta build will soon be captured for this variant too.

How to Install One UI Beta on Samsung Galaxy Note 8?

Once you have made sure that your phone is on the required CRK1 firmware, you can follow the steps below to sideload the OTA and manually install One UI Beta on Galaxy Note 8.

If in any case the ‘Apply update from SD card’ method doesn’t work for you, you can also install the OTA via ADB Sideload.

So you have just been able to install Android Pie-based One UI Beta on Samsung Galaxy Note 8. If you have any questions regarding the update process, leave a comment below.