Samsung is now rolling out the stable Android 10 update for Galaxy A50 with the latest March 2020 security patch. If you still haven’t received the OTA update notification, you can download the Samsung Galaxy A50 Android 10 (One UI 2.0) firmware from this post and follow the provided insturctions to manually install the update right now.

Ever since the official launch of Android 10 last year, several manufacturers like Essential, OnePlus, HMD, and Asus started releasing the latest update for their top-line devices. And Samsung wasn’t afar either. The company quickly began beta testing Android 10 for its 2019 flagships, followed by the stable release just a month later. Samsung further went on with the rest of its lineup soon after and now the ball is rolling for the Galaxy A50.

The Android 10 update for Galaxy A50 is currently available for the SM-A505F and SM-A505N models with ‘A505FDDU4BTC4’ and ‘A505NKSU3BTC3’ software build numbers, respectively.  Since it is being rolled out over-the-air, the update should soon be available for more models in the rest of the regions as well. The OTA weighs about 1.7 GB which is pretty large considering this is a major upgrade for the phone.

To check if the update has arrived on your particular A50 unit, you can go to ‘Settings’ > ‘About phone’ > ‘Software update’. If it hasn’t, then you can manually upgrade right now by downloading the Galaxy A50 Android 10 firmware from below and installing it using the Odin Tool.

Now before you head to the download links and instructions, let’s take a quick look at some of the new features you can expect from this latest Android 10 update on your Galaxy A50.

Android 10 for Samsung Galaxy A50 – New Features and Changelog

Being a major Android version upgrade, Android 10 brings quite a lot of new features to the table. The major ones include a system-wide dark mode, improved full-screen gesture navigation, live captions, Focus Mode in Digital Wellbeing, Location & Privacy Controls, and more.

Samsung’s One UI 2.0 skin that sits over the new Android version offers some exclusive features of its own. To start with, One UI 2.0 still incorporates the traditional navigation system, so you can always switch up the navbar or use Samsung’s own implementation of gesture navigation. The fact that this gives users more choice, makes Samsung’s implementation better than Google’s.

Samsung has also introduced a few key changes to the Face Unlock feature for better security. First, you can now add an alternate look of your face along with the primary. And second, you can also adjust the Face Unlock settings which will require you to keep your eyes open when trying to unlock the phone.

Apart from these, there are several minor changes that have been done to the UI for better user experience. For instance, the dynamic text color feature adjusts the text colors on the lock screen based on the colors of the applied wallpaper. This makes it easier for users to view important information on the lock screen easily. Needless to say, that’s not all the new features you’ll get. There are several others that you’ll see and experience once you have upgraded your Galaxy A50 to Android 10 and One UI 2.0.

You can also watch the video below to get an overview of all the new features you can expect from this update.

Now without any further wait, let us straight get to the firmware download links and installation instructions.

Make sure that you fulfill all the requirements listed below before you proceed any further.

The fastest way to download the latest Android 10 firmware for your Galaxy A50 is directly from the Samsung servers. Although you can use online firmware databases like SamFrew, SamMobile, etc, I would personally recommend using the Frija or SamFirm tool. Both of these tools will allow you to download the firmware at high speeds and they are fairly simple to use as well. 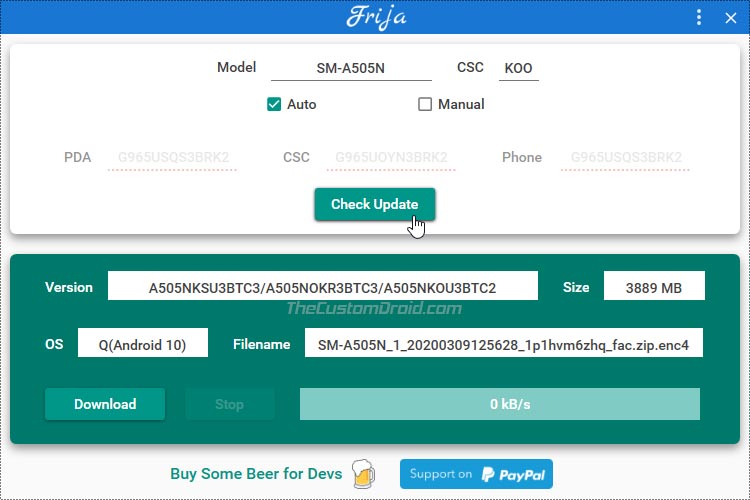 Once you have downloaded the tool from the linked page, launch it on your Windows PC. Enter your phone’s full model number (e.g. SM-A505F) and region/CSC code (e.g. DBT) in the provided fields. Finally, select ‘Auto’ mode and hit the ‘Check Update’ button. The tool will automatically fetch the latest Android 10 update firmware directly from Samsung’s sever for you to download.

Installing the Android 10 firmware on your Galaxy A50 can be easily done using the Odin Flash Tool. All you have to do is boot your phone into Download Mode, connect it to the PC, load the firmware files in the Odin tool and finally flash it. The step-by-step instructions for the same are below.

After the installation finishes, you shall see the ‘PASS!’ message in the Odin tool window. Your phone will automatically reboot and should now be running the latest Android 10 software, along with March 2020 security patch.

So, you have just been able to download and install Samsung Galaxy 9 Android 10 (One UI 2.0) update. Now go ahead and try out all the new features in this update. If you have any questions regarding the installation process, then please leave a comment below.